The man who walked into Parliament with a lump of coal

Another podcast in the continuing #transitzone side-bar series on grassroots democracy in Australia and the emerging and evolving "Voices for" independents movements gearing up for the looming federal election.

Margo Kingston and Peter Clarke in conversation with Zali Steggall, the federal independent member for Warringah in Sydney, a "safe" Liberal seat until Steggall ousted the incumbent and former Prime Minister, Tony Abbott, at the 2019 federal election via a vigorous community-based campaign focussed primarily on climate change.

In Parliament, Steggall (described by some as a fiscal conservative and social progressive) has pursued climate change and truth in political advertising by drafting and presenting her own private member's bills, the same way Steggall's fellow cross-bencher, the independent member for Indi In Victoria, Helen Haines (an earlier #transitzone guest), has done around her proposed Australian Federal Integrity Commission. 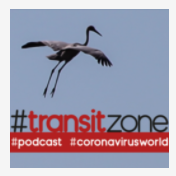